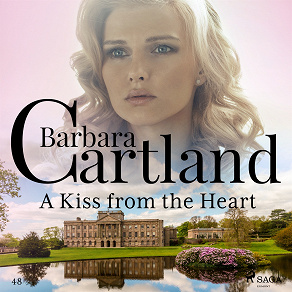 A Kiss from the Heart

by Barbara Cartland
"I do not wish to be the Earl! I would much rather go back to London."

On his return from India, Lord Robert Templeton is distraught to find his family home, Ledbury Hall, plunged into mourning. His father, the Earl, has just died and he is the new Earl. He is reluctant to take up his new duties and instead flees to London, leaving his younger brother, Alec, in charge.

Pursuing an empty life of gambling, affairs with actresses and married women, the Earl is forced to return to Ledbury Hall when Alec has a sudden accident.

He renews his acquaintance with his childhood friend, Miranda Whitby, who saved his life many years earlier and who is now a beautiful young woman.

They rekindle their friendship and it soon turns to love, as the Earl now takes on the responsibilities he once shirked.

However, his mother invites the attractive Lady Waterton to stay, who has just one idea in mind, and that is to make herself the next Lady Templeton! But Miranda has secrets of her own and when the mysterious Lord Brookfield suddenly appears, the threat of danger hangs over her and her future.

Can true love find a way or will Lord Brookfield’s evil plan to abduct her and make her his own succeed? Find out more by reading this exciting and romantic novel by BARBARA CARTLAND.
Listen to sample
Log in to borrow